Last night, Auckland Cricket held our Cricketer of the Year Awards for 2021/22 hosted by Laura McGoldrick.

Here are the award winners.

It was a build-up like no other. Planning. Training. Waiting for competitive action. Even for a coach who loves training, there was genuine relief when the ACES finally took the field in December. Though the ACES Head Coach wasn’t on hand for the champagne moments of the season, Heinrich set the wheels in motion for successful Plunket Shield and Ford Trophy campaigns through commitment and leadership.

Women’s Batter of the Year | Lauren Down

This summer, the HEARTS skipper led from the front amassing 496 runs across the Hallyburton Johnstone Shield and Dream11 Super Smash competitions. In just four 50-over matches for the HEARTS, Lauren hit her third List-A hundred, scoring 124 against the Wellington Blaze, as well as two half-centuries. Lauren finished with 261 HBJ Shield runs at an average of 65.25 in 2021/22. For the WHITE FERNS, Lauren starred in the third ODI against India, claiming Player of the Match honours for an unbeaten 64 off 52 balls to seal a memorable series win.

This season Robert O’Donnell took his game to another level, hitting career-bests in all three formats. Starting with 68 against the Central Stags in the Super Smash, a maiden List-A hundred against Canterbury before posting 223 against the same opposition in the Plunket Shield. Batting at five for much of the summer, Robbie was asked to play different roles. The skipper led the way in the ACES victorious Plunket Shield campaign, scoring 539 runs at an average 67.38, including two hundreds.

Bowling tough overs in the powerplay and at the death, Arlene finished the Dream11 Super Smash as the HEARTS leading wicket-taker with ten scalps to her name. Add to that an economy of just over five during the tournament, it is no surprise that the skipper turned to Arlene in the big moments. One of the more experienced HEARTS bowlers nowadays, Arlene kickstarted the season with figures of 3-21 against the Northern Brave before a strong run of form towards the end of the T20 campaign.

This year’s winner is the unsung hero of the bowling attack, bowling the tough overs, often into the wind. Bowling in partnerships, Ben Lister built pressure throughout the summer, picking up 28 wickets across formats. Ben was an integral part of the Plunket Shield campaign, claiming early wickets to get the ACES on the front foot. Consistently swinging the ball both ways, Ben’s contribution to the Ford Trophy Final win cannot be understated.

There have been fewer better starts to a First-Class career than that of Simon Keene. The young seamer burst onto the scene this summer, taking match figures of 5-24 on debut against the Otago Volts to bowl the ACES to a first away victory in 2017. The 20-year old didn’t stop there, picking up 4-47 on List-A debut against the same opposition, before collecting a pair of Plunket Shield six-fors against Cantebury and Wellington at home to help keep the ACES rolling in the Plunket Shield.

Taking combined figures of 7/61 and collecting Player of the Match honours in the World Test Championship Final only enhanced Kyle Jamieson’s reputation on the world stage. The 27-year old now has 66 Test wickets in just 14 matches, including a further 14 during the home summer. To cap off his summer, Kyle led the attack against the Netherlands, picking up six wickets in a 3-0 series win. 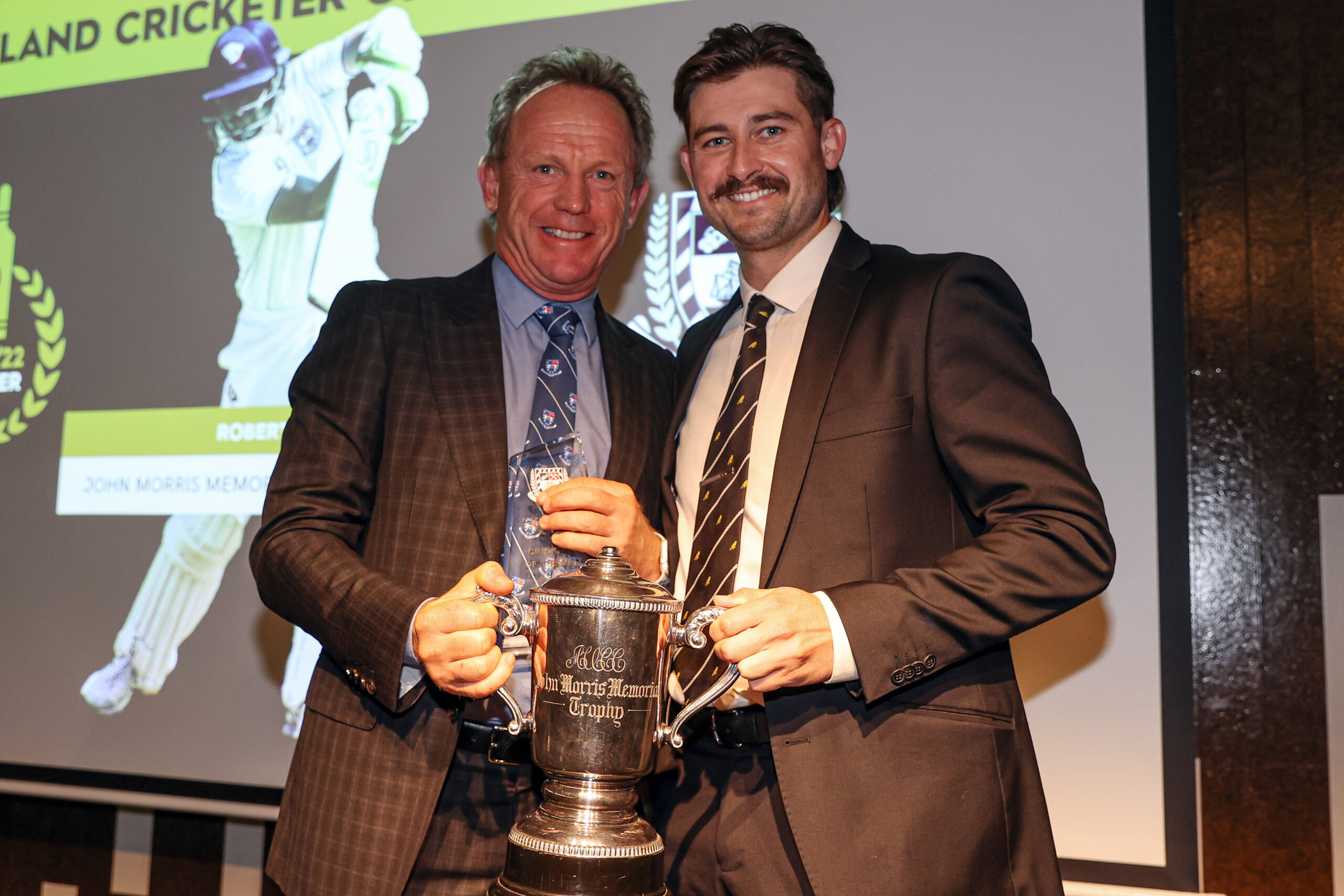 This year’s winner embraced the uncertainty, rose to the challenge and led from the front. Knowing Auckland’s Cricketers would have their backs against the wall this summer, this year’s Cricketer of the Year was determined to not let a delayed start be an excuse. Leading from the front, welcoming new players into the group, backing individuals to perform their roles, taking their own game to new heights are just a few highlights of what the 2021/22 recipient brought to the table.

Recently named NZC’s Men’s Domestic Player of the Year, our double-winning skipper, the ACES fearless leader, Robbie O’Donnell is our Cricketer of the Year. 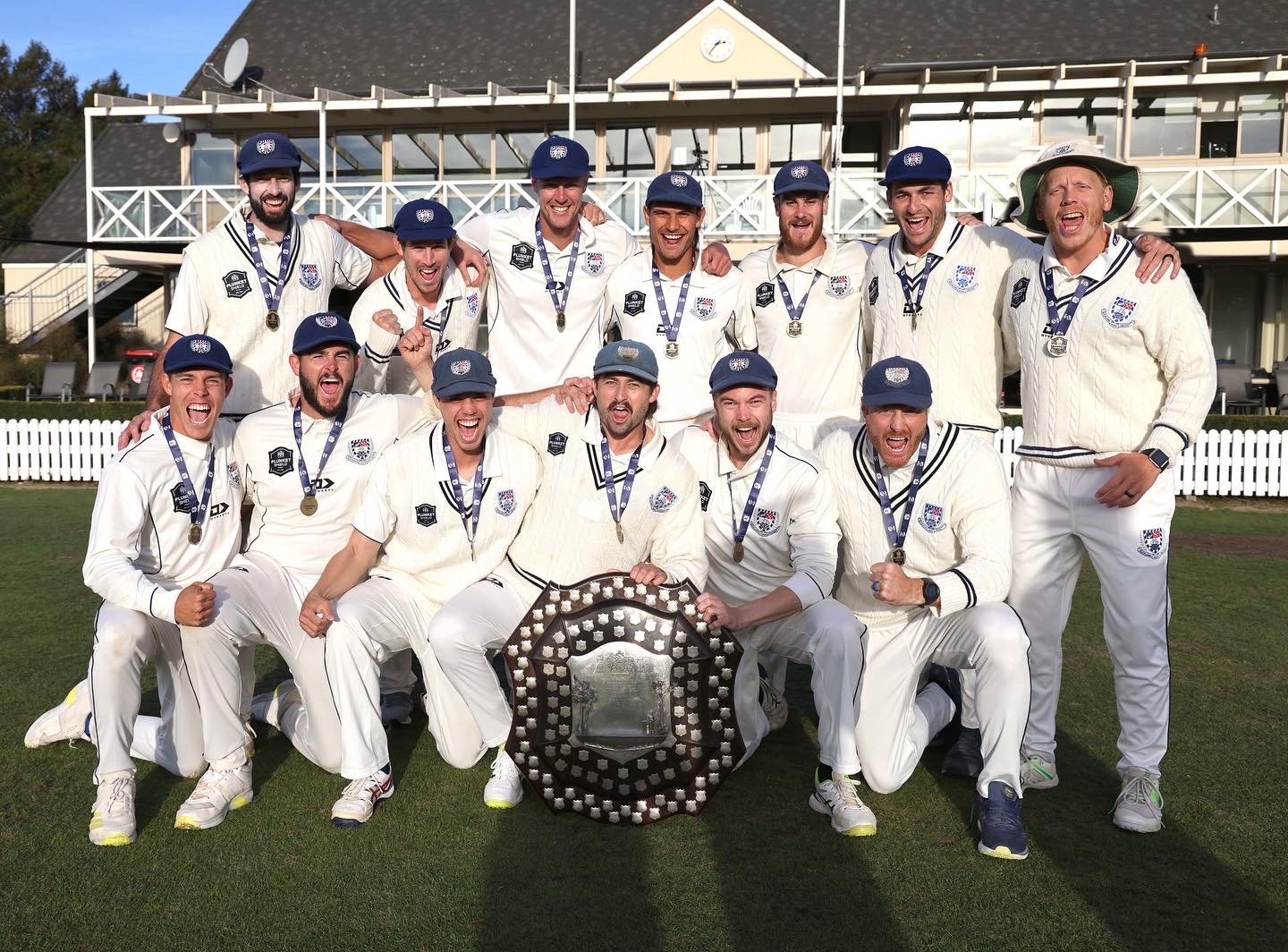 Katie Perkins | 100 T20s and most List-A appearances for the HEARTS.

Another year. Another groundbreaking milestone for Katie Perkins. On January 15, at Kennards Hire Community Oval, Katie became the first player to make 100 T20 appearances for Auckland. Katie was presented with a commemorative cap on the day and spoke about how much the game has changed during her time in HEARTS blue.

This summer, against the Wellington Blaze, Katie also surpassed Vic Lind to become the HEARTS all-time leader in List-A appearances. The HEARTS veteran now has 125 Domestic List-A caps to her name.

While it took the Auckland sides some time to finally get on the park, it didn’t take Holly Huddleston long to pick up the one wicket she needed to become the HEARTS’ highest all-time wicket-taker. The wicket of Brooke Halliday, caught by skipper Lauren Down, took Holly to 171 wickets and past Natalee Scripps. Holly would take a further 8 wickets this season to sit on 179 scalps in total. Next stop, 200.

In between summers, Roz McNeill decided to call time on her HEARTS career.

Having debuted on December 2, 2011, against Canterbury at Melville Park in the T20 competition, Roz went on to be a part of five successful 50-Over championships as well as one in the T20 format.

Through 104 matches, Roz took 76 wickets for Auckland, with best bowling figures of 4-20 to help the HEARTS win the 2015/16 50-Over Final against Wellington.

At the time of her retirement, Roz said “Playing for the HEARTS has been a huge part of my life. I have made lifelong friends and so many treasured memories, all of which I am truly grateful for.”

At the end of the Super Smash campaign, Anna Peterson hung up her HEARTS jersey for the last time. A regular match-winner, Anna was never far from the action during an eight-year stint for the HEARTS, having played the first seven seasons of her career for Northern Districts.

Anna debuted for Auckland against Otago on November 28, 2014, in a convincing eight-wicket win.

In Anna’s 115 matches for Auckland, the all-rounder scored 2137 runs and took 132 wickets. Peterson also captained the HEARTS to the 2019/20 HBJ Shield victory over Northern Districts at Seddon Park.

In her own words, “So much has changed in the women’s game since I started playing. It has been an honour to have been part of such positive change and growth for women’s cricket.”

One of the moments of the night came when the appreciative crowd gave the outgoing HEARTS coach a standing ovation.

Nick started with Auckland Cricket in the School Activation space in 2006 and has been with the Association ever since.

Undertaking roles across representative cricket, talent and identification and most recently as the HEARTS Head Coach, Nick’s passion for the game and putting Auckland Cricket first has been second to none.

Nick spoke about his early days in New Zealand, how he found a family in Auckland Cricket, and how he is excited to see Auckland’s next generation of cricketers come through.