The Plunket Shield, Ford Trophy and Hallyburton Johnstone Shield schedules have been announced with special considerations for the Auckland sides as we condition through Alert Levels.

Both the Auckland ACES and HEARTS, as well as both Northern Districts sides, will miss the opening rounds of the Domestic cricket season, as the impact of Auckland’s Level 3 and 4 lockdowns necessitates a pragmatic approach to the 2021-22 season.

NZC has endeavoured to allow adequate time for Auckland-based players to get game-ready as the city hope to return to Level 2 next week.

The ACES summer will kick off in round 3 of the Plunket Shield season on Sunday 7 November. A Round 1 clash against Northern Districts and Round 2 fixture with Canterbury have been postponed, with details of all rescheduled matches to be confirmed by NZC at a later date.

This means fans will get their first sight of the ACES at the Outer Oval, newly named the Kennards Hire Community Oval, when the Otago Volts come to town from 15-18 November.

The Auckland Hearts will likewise make a delayed start to their Hallyburton Johnstone Shield campaign, taking on the Canterbury Magicians at Rangiora’s Mainpower Oval on 6 and 7 November. The competition begins a week earlier for the remaining four sides.

Along with the trip to Rangiora, the HEARTS make road trips to Palmerston North and Hamilton as they look to recapture the Hallyburton Shield.

Kennards Hire Community Oval will host home double-headers on the weekends of 20/21 November against the Wellington Blaze and 12/13 February with the Otago Sparks, completing the round-robin ahead of the Grand Final on the 19 February.

The ACES will again have six Ford Trophy clashes at home, with four at Kennards Hire Community Oval and two at Colin Maiden Park to close out the ten-game round-robin.

The Dream11 Super Smash schedule for both the ACES and HEARTS will be released in the coming weeks. 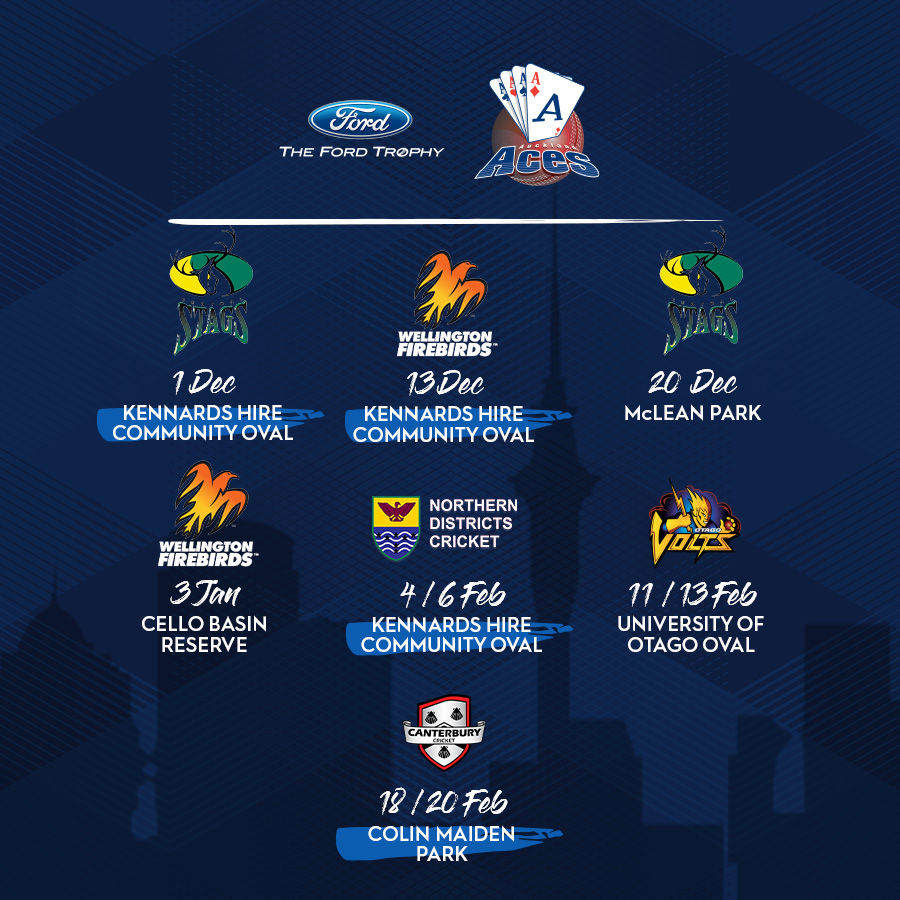