East Coast Bays hit Takapuna hard early and often with the ball to set up a five-wicket win at Onewa Domain. Just when Daniel James (30) and Guy Harley (20) had reconsolidated Chris Groenink (2-18) ended the knocks of both set batsmen. Then Phil Mecredy (3-21) extinguished any thoughts Takapuna had of a big finish.

Chasing 114, Bays top three did the bulk of the work; Tristan van Ingen-Kal (46) and Cole Briggs (30) took the visitors to the brink before Jayden Quensell (3-18) applied some late pressure. In the 17th over, Bays eventually made it a two-from-two start.

Hibiscus Coast ticked another big scalp off their list, with a final over victory against North Shore at Devonport Domain. Led by Ramesh Lakmal (2-16), Coast’s reasonable start with the ball kept the hosts to 149/5, despite significant knocks by Simon Keene (45) and Hemadri Chakraborty (42*).

Lakmal continued to be a threat to Shore, when he opened up with bat in hand. With Alister Sail (30), the left-hander put on 71 for the first wicket. Despite such a fast start, a young North Shore side didn’t make it easy for the incoming batsmen. Though the hosts got themselves in front of the game as Hibiscus Coast lost their middle order, Lakmal hit a four and a six in the final over to cement a famous victory.

Kumeu put on the highest total of the day and later saw off a racing Waitakere chase to pick up a memorable 28-run win at Huapai Domain. Nikhil Ghallyan got Kumeu off to a flier, hitting 9 fours and 2 sixes on his way to 60 off 31 balls. Waitakere will have hoped to slow the scoring after the wicket of Ghallyan, but Pankaj Kumar (63*) played the finisher role with 5 fours and 3 sixes of his own.

Waitakere were always going to need a fast start if they were to chase down Kumeu’s 202/5 and Brian Barnard was in no mood to muck around, hitting 5 fours and 2 sixes during his 14-ball 40. Kavi Minhas (54) and Shozib Mirza (46) then put on 103 for the second wicket, keeping up with the required run-rate. Tarun Nethula (4-5) then turned the match in Kumeu’s favour, killing off Waitakere’s hopes taking four wickets in his first over. Waitakere finished on 174/8 at the end of their 24 overs.

Cornwall’s bowling attack were on from the get-go against Eden Roskill at Keith Hay Park. The wickets were shared at the top with Freddie Klaassen, Michael van den Berg and Swapnil Karnik all picking up two wickets apiece, but the star of the first inning was Liam Wheeler, who picked up 4-12 as Eden Roskill were all out for 93 in the 17th over.

In reply, a 50-run second-wicket stand between Josh MacKinnon (28) and Aditya Dhadwal (21) sucked any remaining hope out of the hosts. Oyashik Chakraborty picked up a pair of wickets to delay Cornwall’s victory before Glen Stanton-Cook finished the match in style with back-to-back sixes.

Parnell overcame Grafton in a close-run match at Shore Road. After last week’s false start, Parnell were tested by Grafton’s attacking top order. It was Campbell McKegg, who best came to terms with the host’s attack, hitting 55 off 38 to help his side to 144/7. For Parnell, Aniket Parikh’s three wickets proved crucial when the hit was on towards the end of the innings.

Despite a settling 51-run second-wicket stand between Flynn McGregor-Sumpter (49) and skipper Andy Lane, it was a rollercoaster second innings for both sides. Carl de Beer (3-21) and Jack Dymond (2-21) applied some pressure to the Peaches middle-order to leave the hosts needing 46 from the final five overs. Fanie de Villiers got the fast finish started before Josh Fisher (21*) and Dean van Deventer (16*) took Parnell to victory with three balls to spare.

It took a team effort for Papatoetoe to go two from two, defending a low total against Ellerslie at Papatoetoe Recreation Ground. Josh Plummer and Barrington Rowland gave the hosts a solid platform to build on, but the Horses hit back through the middle overs. Varun Khanna (2-18) and Akash Ogra (2-16) were two of Ellerslie’s key bowlers as Stuart (27) and Stephen (22*) Money fought to get Papatoetoe to 123/7.

Ellerslie were in immediate trouble, when Daman Bhatti (2-23) struck with the first ball of the chase. Despite Abrar Alam (40) doing his best to hold the innings together, regular wickets continued to fall and Ellerslie found the required run-rate going up. For Papatoetoe, Rihan Sayed (2-17) squeezed the new batsmen, helping his side to a comfortable 16-run win.

Skipper Andy Morrison helped Howick Pakuranga bounce back against Auckland University at Colin Maiden Park. Batting first, University were in considerable trouble at 38/3 in the 7th over. Ash Vodnala (29) and Christy O’Brien (44) then put the hosts on track for a competitive score. Howick Pakuranga, however, finished the first innings strongest keeping University to 129/6.

University hit back in the powerplay with a pair of early wickets, forcing the visitors into a more cautious approach. The match-defining partnership never came, but Morrison took responsibility of getting his side over the line. Needing 32 from the final four overs, Morrison finished with 46* off 39 balls to go with four dismissals (two catches and two stumpings) with the gloves as Howick Pakuranga won by five wickets.

Suburbs New Lynn got their campaign off to a winning start against Birkenhead after last week’s abandoned match. For Birkenhead, last Saturday’s fourth-grade phenom Jasmeet Singh was thrown in at the top of the order and top-scored for the hosts with 30. Dane Watson (3-30) and Sam Cook (3-31) were the best of the Suburbs bowlers as Birkenhead were bowled out for 125 in the final over.

In reply, Tejas Patel (23) and Tristan Payle (22) set the chase on the way. While Anuradha Jayampathi (3-24) claimed the first three Suburbs wickets, the inning of note came from Steve Martin (46*), who hit 2 fours and 2 sixes to inch Suburbs closer to a successful chase. At the end of the 19th over, with the scores tied, Watson hit a six to complete a comfortable five-wicket win for Suburbs.

To close out club cricket for 2020, it’s an action-packed weekend in the Premier Men’s white-ball competitions. On Saturday, we enter Round Two of the Jeff Crowe Cup and Richard Jones competitions, while on Sunday it’s double-header T20 time at Devonport Domain, Ken Maunder Park, Cornwall Park and Colin Maiden Park with matches starting at 11 AM and 3 PM. 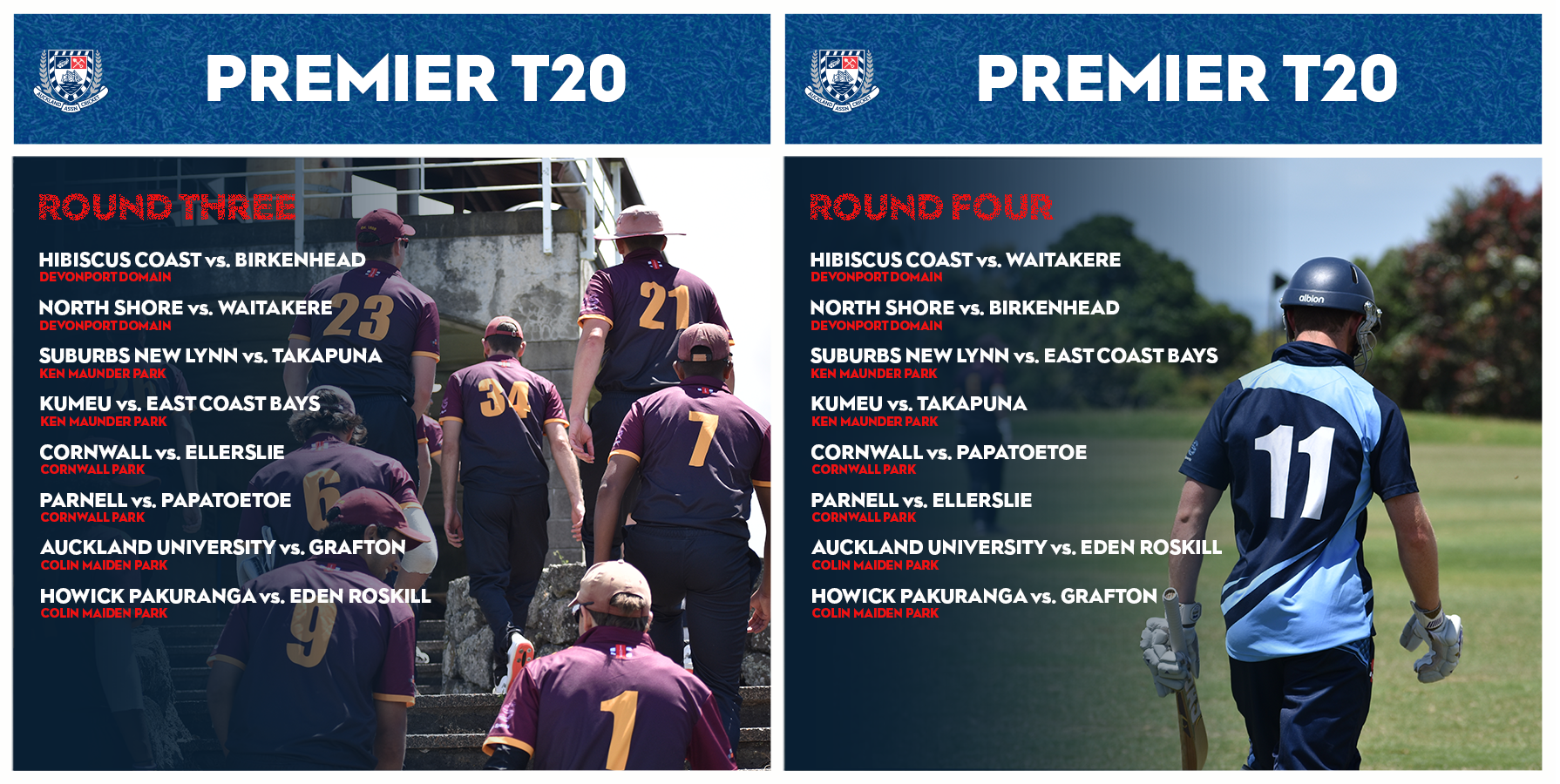